If  you happened to be in Greece you should not missed visiting the Citadel of Athens or popularly known as the Acropolis. It is also known as Cecropia, named after the legendary serpent man, Cecrops the first King of Athens.  The Acropolis is a flat-topped rock that rises 150 m (490 ft) above sea level in the city of Athens with a surface area of about 3 hectares.

1. Parthenon -  is a temple of the Athenian Acropolis, which is dedicated to the Goddess Athena  whom the Greek considered as their patron. The Parthenon is regarded as the enduring symbol of ancient Greece and of Athens democracy. It is also one of the world's greatest monuments.

2. Old Temple of Athena  - was located at the centre of the Acropolis plateau, it was the shrine of Athena Polias the patron deity of the city of Athens. On 480 BC it was destroyed by the Persians.

3. Erechtheum -  is an ancient  Greek temple on the north side of the Acropolis. The temple as seen today was built between 421 and 406 BC. This temple was dedicated to a Greek Hero  Erichthonius.Some have suggested that it may have been built in honor of the legendary king Erechtheus who  was said to have been buried nearby.

The Porch of Caryatids - On the south side, there is another large porch with columns, and on the south, the famous "Porch of the Maidens", with six draped female figures (caryatids) as supporting columns, each sculpted in a manner different from the rest and engineered in such a way that their slenderest part, the neck, is capable of supporting the weight of the porch roof while remaining graceful and feminine.

4. Statue of Athena Promachos - was a colossal bronze statue of Athena sculpted by Pheidias, which stood between the Propyleae and the Parthenon on the Acropolis of Athens. Athena was the goddess of wisdom and warriors and the protectors of Athens

5.Temple of Athena Nike - Nike means victory in Greek and Athena was worship in this form for she  is the goddess of victory in war and wisdom. Her temple was the earliest fully ionic temple on the Acropolis, compensated by its prominent position on a steep bastion at the south west corner of the Acropolis to the right of the entrance.

6. Propyleae - the entrance building to the Acropolis. In 437 BC the construction of the Propyleae was started. Propylea was a monumental gate with columns of  Pentelic marble.The colonnades had two wings, the northern part serves as picture galleries, and at the  south of the propylaea, commenced a small Ionic Temple of Athena Nike.

7. Eleusinion - was the place where all sacred objects associated with the  Eleusinian Mysteries were kept between ceremonies. It was located at the base of the Acropolis.

8. Sanctuary of Artemis Braurnia - located in the southwest corner of the Acropolis plateau, between the Chalkotheke and the Propyleae.  It was originally dedicated during the reign of Peisistratos. Artemis Brauronia, protector of women in pregnancy and childbirth.

9. Chalkotheke - its means bronze in Greek. I t is a structure on the Acropolis.  Its name and function are only known from 4th century BC inscriptions. One decree orders the listing of all objects stored in the Chalkotheke and the erection of a steel  inscribed with that list in front of the building.

10. Pandroseion -  a sanctuary dedicated to Pandrosus one of the daughters of  Cecrops 1 the first king of Greece.

11. Arrephorion - a small building sited beside the north wall of the Acropolis. It provided the lodgings for the arrephores, the girls who worked for a whole year just below the acropolis weaving the new people for panathenaic procession.

13. Sanctuary of Zeus Polieus -  a no walled open-air sanctuary,dedicated to Zeus Polieus ( City Protector,  around 500 BC on the Acropolis.

14. Sanctuary of Pandion - was an open-air sanctuary or shrine at the south-east corner of the Acropolis dedicated to Pandion.

15. Odeon of Herodes Atticus - is a stone  theatre structure located on the south slope of the Acropolis.  It was built in 161 AD by Herdes Atticus in memory of his wife.  It was originally a steep-sloped amphitheater  with a three-story stone front wall and a wooden roof, and was used as a venue for music concerts with a capacity of 5,000.

16. Stoa of Eumenes -  It was built against the slope of the hill (meaning it needed a retaining wall supported by piers and round arches. It was name after Eumenes II whos brother Attalus II f Pergamum built the Stoa of Attalus in the Athen's Agora.

17. Sanctuary of Asclepius - a healing temple, sacred to the god  Asclepius.Asclepius was probably first worshipped as a hero in Trikka, Thessaly, which ancient mythographers generally regarded as the place of his birth. Epidauros, on the other hand, was the first place to worship Asclepius as a god, beginning sometime in the 400's BC.

18. Theather of Dionysus Eleuthereu - a major open air theater and one of the earliest preserved in Athens.  It was used for festivals in honor of the god Dionysus. It is commonly confused with the later and better-preserved Odeon of Atticus because they are next to each other. It is located on the southwest slope of the Acropolis.

19.Odeon of Pericles - was a 4000 m² odeon built at the foot of the south-east part of the  Acropolis,  to the left of the entrance to the Theater of Dionysus. It was built to shelter audiences in case of bad weather and for rehearsals. 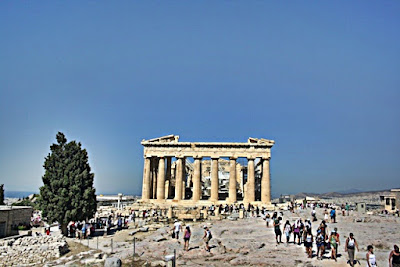 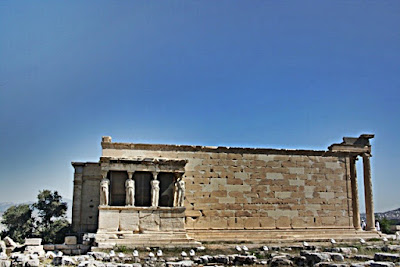 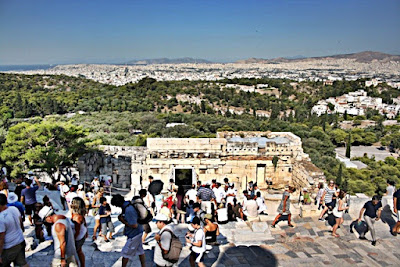 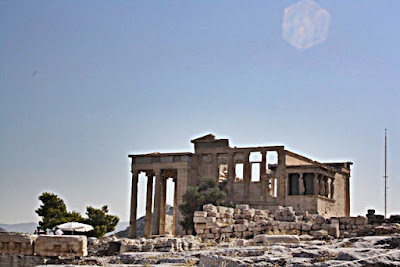 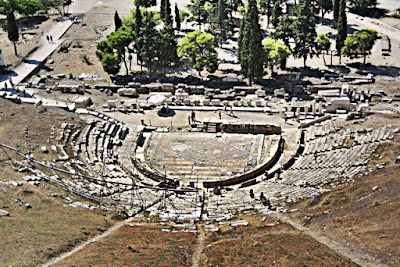 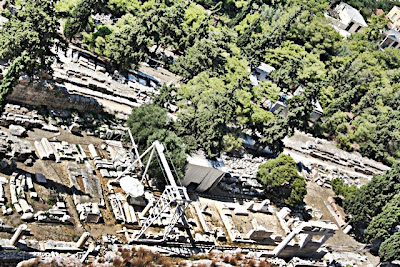 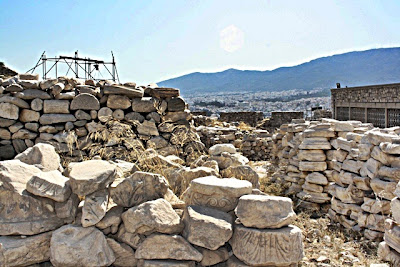 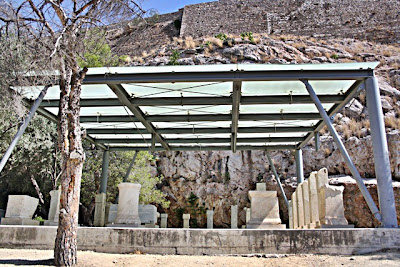 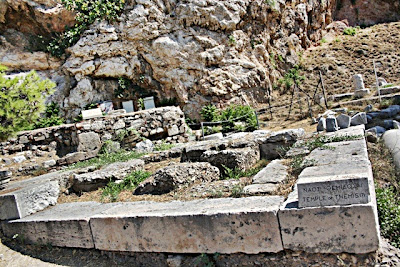 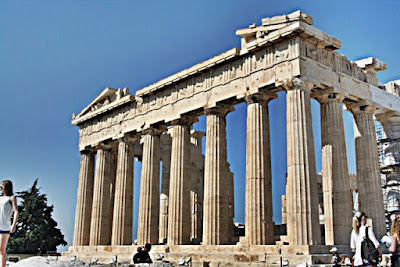 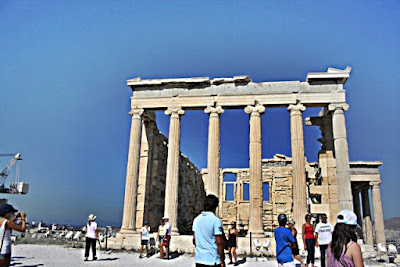 Beautiful Athens from the top of the Acropolis!
See Photos Below 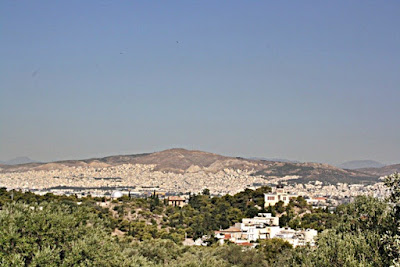 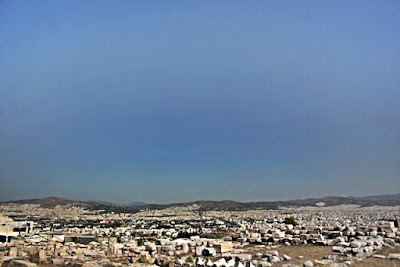 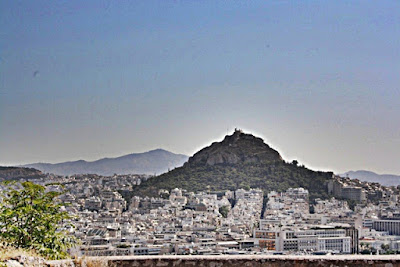 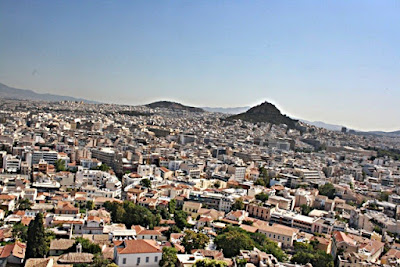 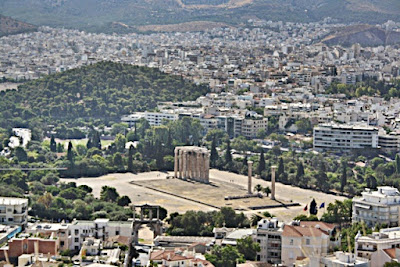 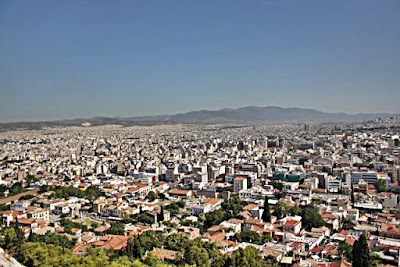 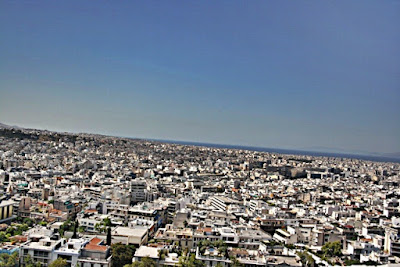 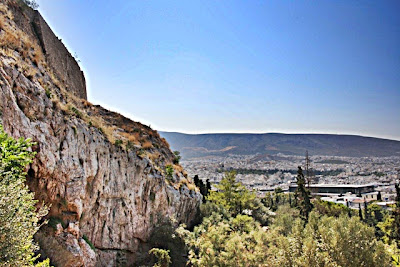