One day we went to the second largest city of Netherlands and said to be the most advance city in Netherlands too. They're  we saw a lot of new nice infrastructures and buildings, it feels like your in one of the US cities. They build a lot of new and modern buildings but still they try to preserved the old ones.  This city has a lot of festivals that runs almost all year round and one of the reason also that's it attracts lots of tourist to flock in the city.During our trip there we talk  several photos of the surroundings and the city itself. 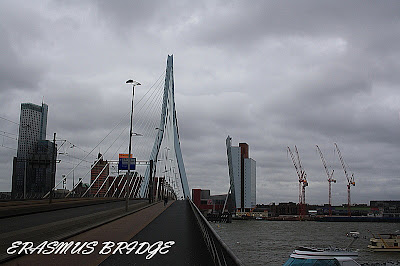 listen)) is a city and municipality in the Dutch province of South Holland, situated in the west of the Netherlands. The municipality is the second largest in the country, with a population of 603,425 as of March 2010.
The greater Rotterdam area is often known as 'Rotterdam-Rijnmond'/'Rijnmond region' (Rijnmond literally translates into "Rhine's mouth", referring to Rotterdam's location at the end of the Rhine-delta and its economic position as Europe's main port), yet other versions can be suggested for greater Rotterdam. Depending on what version is chosen, the area contains between 1.2 and 1.4 million people. When including The Hague, with whom Rotterdam now shares the Rotterdam The Hague Airport and city-lightrail RandstadRail, the enlarged region approaches 2.5 million inhabitants. It forms the southern part of the Randstad, the sixth-largest metropolitan area in Europe, with a population of 6.7 million.
The port of Rotterdam is the largest in Europe. From 1962 to 2004 it was the world's busiest port until surpassed by Shanghai. Rotterdam is on the banks of the river Nieuwe Maas ('New Meuse'), one of the channels in the delta formed by the Rhine and Meuse rivers. The name Rotterdam derives from a dam in the Rotte river.
Posted by eigroj at 5:58 AM